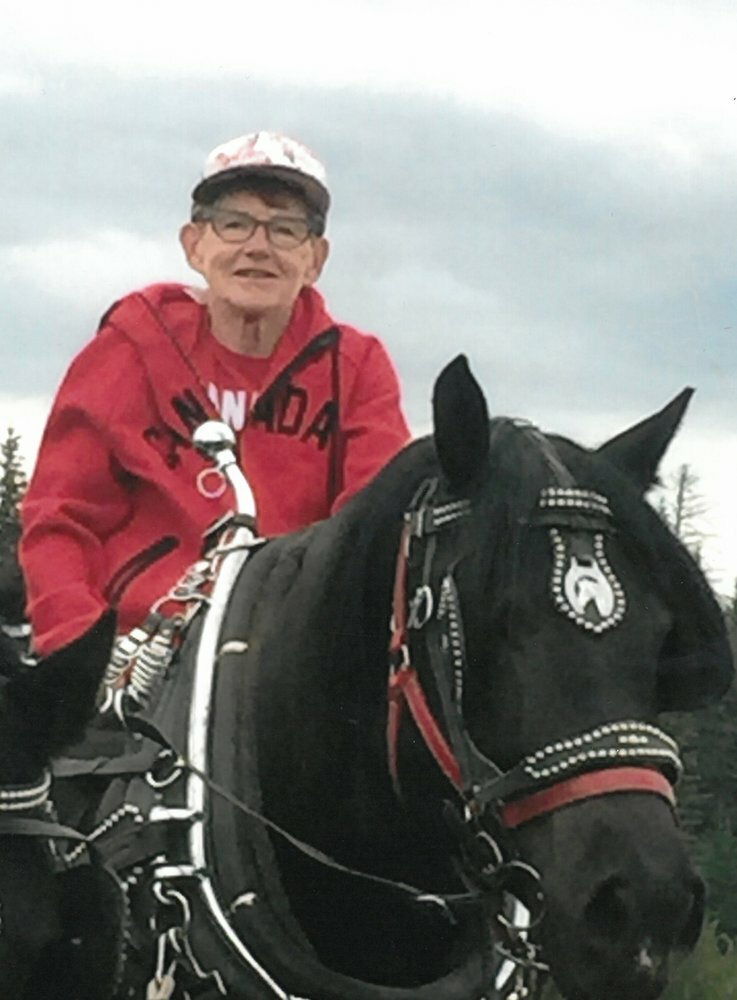 Anne Rice was born as Anna Olenyk on February 12, 1930 in Ft. William now called Thunder Bay, Ontario. As the family was searching for a better place to live and having relatives already in the Bonanza, Alberta area, Anne moved to Bonanza when she was 6 months old, along with her Father Samuel, Mother Bessie and brothers John, Nestor and Alex. She went to School in Bonanza and according to one of her teachers, Mrs. Vicki York, Vicki remembers her as a good student and a kind young girl, she has good thoughts of her. Anne married Everett Rice from the Kilkerran area In Hythe, Alberta on March 31, 1950 and they moved to the homestead in Killkeran and then later into Dawson Creek where they had 7 children, Bernice, Willy, twins Dennis and Dorothy, Jim, Donald and Allan. She was an amazing cook, her Cinnamon buns were a treat and the privilege of licking off the spoon or the cooking pan was often fought over. There were also many traditional Ukrainian dishes that came out of her kitchen, probably due to her mother's influence! The memories the Children have of Baba coming over to help out or visit are vivid. They would watch from the east living room window and could see Baba walking from about 3 blocks away because of her green overcoat and her Babushka. They also knew that she had usually some special treats for her grandchildren.. Besides Ukrainian cooking, one memory that Ray and Marge Turner have is one time when there was a family gathering at their farm and Mom bought some of her fried chicken that was said to be the best anyone had ever eaten.. As was normal in those times, gathering berries was part of summer outings, Mom's pail would always be picked clean with just berries but she would have to pick over the children's berries, because they would pick almost everything along with the berries so that the bucket would be filled up quicker.. Some of her favorite pastimes were bowling and playing bingo,, she seemed to be unusually lucky at bingo claiming wins very often. She never had a drivers license but always seemed to get where she wanted to be. She had a great smile! That and good food, will take one a long way! Anne also enjoyed gardening and especially her flowerbeds. She was an immaculate housekeeper. Card playing and board games were favorites when entertaining guests, she was quite competitive in some of these games. Because her husband worked away from home quite often, she was prepared to defend the home if required.. One occasion causing some excitement was when Everett came home unexpectedly in the middle of the night. After knocking on the door with no response, he started to come in through the kitchen window only to see his wife standing in the hallway holding a rifle hollering "who are you?". Everett hollered back, "it's me, don't shoot". He knew he should be worried because it turned out she was a crack shot. There is a story told about when they were out in a field at the farm when Anne killed 2 ducks, with one shot from a 22 rifle.. I personally have some memories of course and a couple I remember was her (frustrating for me) ability to change the topic of a debate just about the time I thought I might have won.. She was a quick thinker. Dorothy and I took her to see Loretta Lynn, as a Mother's day gift, at the Encana Centre last year, and I know that was a highlight for her, she really enjoyed it. Over the years, Mom had softened and became more tender. I know Dorothy and her had a strained relationship for a number of years, and we are thankful that, for the last few years, Dorothy had her Mom back and was able to spend time with her taking her to Bingos, Tea's and visiting neighbors and friends, she also helped to care for her. Anne passed away on Friday, November 21, 2014 in Dawson Creek at the age of 84 years. A Memorial Tea was held on Thursday, November 27, 2014 from 1:00 pm to 4:00 pm in Reynars Tea Room. Interment will be held at a later date. Anne leaves behind to mourn her Daughter; Dorothy (Alvin) Stedel , Sons; Dennis, Jim, Donald, and Allan Rice, Grandchildren; Troy Fossen, Laurie Fossen, Terry (Sarah) Stedel, Todd (Tanya) Stedel, Alanna (Abel) Garcia, Courtney Rice (Darin Brose), Kathy (Kenny) Regner, Christine (Joe) Similik, Great Grandchildren, Jarret, Abby, Lakota, Maura, Kiersten, Kaitlynn, Brenden and Bryce, Sister; Jenny (Mike) Devlugt, Brothers; Nestor Olenik ,Vern (Sharon) Olenyk, many nieces, nephews, many long time friends and acquaintances. Anne was predeceased by her Husband; Everett, Daughter; Bernice, Son; Willie, Parents; Samuel and Bessie Olenik, Brothers John, Alex, and Maurice. Special Memories of Anne written by Son In Law; Alvin Stedel. For friends so wishing, donations may be made in memory ofAnneto the Heart and Stroke Foundation of B.C. & Yukon 1480-7th Avenue, Prince George, B.C. V2L 3P2. Very Respectfully Reynars Funeral Home & Crematorium

Share Your Memory of
Anne
Upload Your Memory View All Memories
Be the first to upload a memory!
Share A Memory
Send Flowers