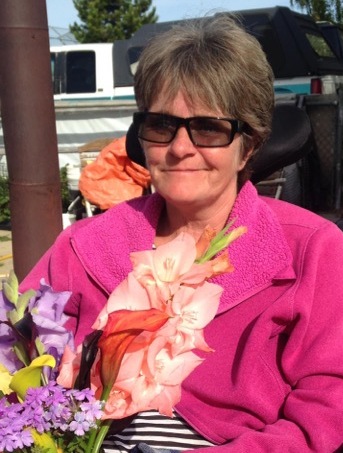 It is with much sorrow that we announce the passing of Barbara Maguire, a long time resident of Dawson Creek. Barb passed away in Dawson Creek, BC on Sunday, August 16, 2020 at the age of 77 years.

Due to current restrictions a private family service was held on Friday, August 21, 2020 at the Dawson Creek City Cemetery.  Celebrant Pauline Haycock officiated.

Barbara, Barb or fondly known as “Babs” was born August 20, 1942 at Dawson Creek St Joseph’s Hospital. She was the 5th child by Anne and Harold Schilds of the family of 11.

Barb left school early and did odd jobs but liked going to the New Palace Café for Coke, chips and gravy and liked checking the boys out.

She became a bit of a rebel in her teen years so Mom would send out a search party of her brothers from time to time.

She met the love of her life at that café.  A young Ed Maguire who was working rigs and driving truck.  They fell in love and got married on April 8, 1960 at the United Church.

They lived in Dawson Creek where their daughter Glenda was born on August 29, 1966.  They decided they would like to live in a warmer place so they moved to Chase. BC.  Barb really liked it there and the weather was good for their arthritis.  Chase was home where their daughter graduated and got married.

Barb always had a great garden which is what she loved about the south, fresh corn and tons of fresh fruit and veggies.  She was known for her canning and spent many hours in the kitchen serving the best canned peaches ever!!

As a member of the Legion, she met a lot of good friends as the Saturday meat draw was always fun.

Barb moved back to Dawson Creek after her husband passed of cancer.  She missed her mom and wanted to be there for her and her family.

She enjoyed trips back to Alberta to visit her daughter and granddaughters Courtenay and Nikki and to see what new critters were on the farm.  She often came to watch her granddaughters dance and take part in singing competitions and 4H shows and was amazed at what our calves brought.

She liked taking us to garage sales and she shared her true love teaching her grandchildren in the kitchen learning to make jam, canning, and cooking.

She reconnected with an old friend Ken who was her partner for several years and travelled to Arizona for the winters and spent the summers on the acreage with her big garden.

Gramma was an incredible woman who fiercely loved he family, never said no to a Coke, ladies lunch, or weekly coffee at the A&W.  She will be missed more than words can say.  She was so proud of her granddaughters.

Barbara and family thank all the doctors(Dr Meyer), nurses and staff for all the wonderful care and the friendships she made at the Dawson Creek Hospital and the Manor.  A big thank you to Reynars Funeral Home, Bonnie, Richard, Pauline and staff, it was so much appreciated.

Barbara was interred at the Dawson Creek City Cemetery at a graveside service on Friday, August 21,2020.

Expressions of Sympathy in Barbs memory may be made by a donation to a charity of your choice.

Share Your Memory of
Barb
Upload Your Memory View All Memories
Be the first to upload a memory!
Share A Memory
Send Flowers