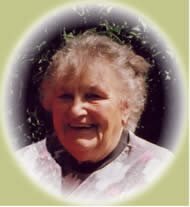 Eulogy for Leona Wilde Leona passed away on September 18. 2013 at 91 years of age after spending about a month in the hospital. Leona or as she was known to a lot of her close friends and relatives "Babe”, and to nieces and nephews Aunt Nona was born at Pouce Coupe B.C. on February 26 1922 to Carl , known to us as "Bud”, and Albertine Lineham. She was their first of three children. Her early childhood was spent on a farm probably about a mile straight west of where we are right now. (Dawson Creek Alliance Church) This is where she started school then they moved to Groundbirch, "a long way from town in them days”. She then went to school at Tuscola Mountain. They rode horses to school, or I should say horse, because the story I heard was mom would push her brother off and make him walk home . Wasn’t she sweet? A few years later she married Kenneth Olsen. Sadly, they had a very short time together as he passed away on Aug 21 1941. She then married Frank Wilde and lived numerous places in the next few years: Sunset Prairie, Willow Valley, Progress, and a few years along the Coldbrook Creek in Groundbirch where Frank worked in various lumber mills. He worked as a faller most of the time. She made her way back to Dawson Creek where she worked at several different jobs: Woolworths, at several drug stores, Lothar Triebel Jewelers, and the Co-op. She was also a volunteer for the hospital auxiliary, Rotary Manor for a number of years, and a part of a singing group at one time. I’m sorry I can’t remember all your names but I guess you know who you are. She also played music with a chosen bunch for a few years I can’t remember all their names either but I know she treasured those times. Mom loved knitting and taught herself how to crochet. She made many baby outfits, blankets, mittens, and quilts. She always had a trunk full of garments she’d made…it was known as the tickle trunk to some of her grandchildren. As most of you probably already know she could be very outspoken and always enjoyed a good joke she has actually been known to tell an off-coloured joke on occasion And in these last few years, most of us can remember a few terrorizing rides with her in her car. Danny told us about her test driving a new car one time. I guess she tore up 8th Street like a raped ape. He asked her why she was going so fast and she said she was trying to find out if it had any rattles. The story I like to tell is when she backed into a post and almost ripped her right hand mirror off. She taped it up with duct tape, but in the process she covered the mirror complete. Anyway I redid it so she could see out of it, but she said it didn’t matter because she didn’t use that mirror anyway. Mom loved music. In fact, she played for many dances in the early years with Frank and Pat Wilde in Groundbirch, Progress, Arras, Sunset Prairie, Willow Valley, Sunrise Valley, East Pine, and maybe more. She also liked to dance. Well, more like LOVED to dance. In fact she was still dancing not much more than 4 months ago. I think that’s pretty incredible for a 91 year old. Seems like a lot of the time mom would have different people staying with her; kids of friends of hers going to school or whatever. And you never knew who you would find sleeping on the couch or on the floor on a Sunday morning. According to Penny, mom liked to make breakfast for all the company… especially greasy fried eggs and what not, I guess she thought it was good for hangovers. She was always protective of us all: "Take that axe away from that child”, "Put those scissors away somebody is going to lose an eye”. According to Penny, Mom had a way to tell when you came home late or if you had been drinking or not. She would put a hamper in the hallway then if you tripped over it that meant you had been drinking. Penny said she could always get by it when she’d been drinking, but would trip over it when she was sober -- go figure. Another thing our mother was good at was pouring our booze down the sink. I guess she didn’t realize that we had worked hard for the money we’d spent on that stuff. There is one story that I would like to tell but I guess I won’t. I’ll just tell you some advice that mom would probably give us all, whatever you do don’t put DEPENDS in the washer or dryer that’s all I’ going to say…. Mom was predeceased by both parents and her brother Don, son Randy… infant granddaughter Lea and grandson Darren Hodson. Son-in-law Dean, and daughter- in-law Gail. Mom leaves to mourn one sister Joyce; 4 children: Gary, Dianne, Danny, and Penny; nine grandchildren; 20 great-grandchildren; one great-great- grandchild, a whole lot of nieces and nephews; and of course her many friends she’d made in all those years. She really did enjoy all her friends, And finally, -this to my siblings- mom left us kids a letter, it ended with her telling us to be good to each other,…let’s not ever forget to do that. Mom, we’re all going to miss you so much, but you’ll always be in our hearts Thank you for loving us
Share Your Memory of
Leona
Upload Your Memory View All Memories
Be the first to upload a memory!